The Texas Advantage: Why Texas is the Best State for Multifamily Apartment Investing

Texas is the best state in the US – at least, for multifamily apartment investing (and great BBQ, football and music).

US real estate – and Texas real estate, in particular – is a hot commodity for foreign investors. This trend has been picking up steam over the past decade and shows no sign of stopping.

Texas continues to have a lot of potential for foreign investors due to the size of its markets. As a percentage of the total market, foreign investors do not comprise as big a portion as New York and California, which means there is still more room for growth. 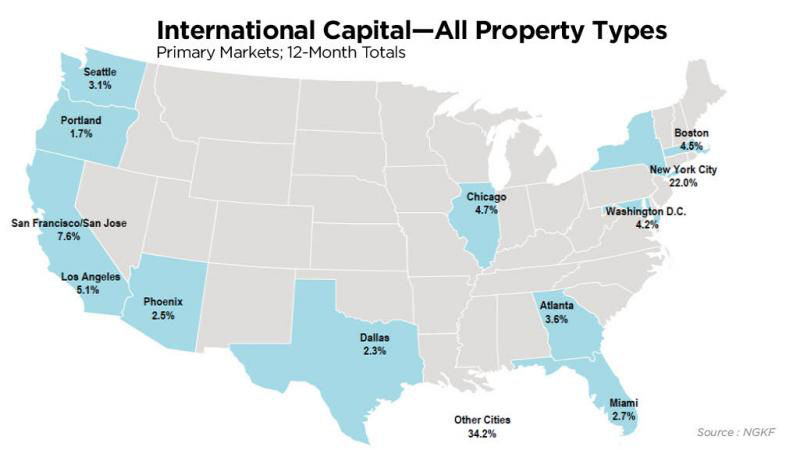 Why is the Lone Star State Attractive To Foreign Investors?

Strong Economic Growth: Texas is the second largest economy in the US with a GDP of $1.6 trillion. This ranks it in the top-10 global economies. The state consistently comes in first for its economic climate, economic growth and job creation. 109 of the 1,000 largest public and private companies in the United States call Texas home, including AT&T, ExxonMobil and Dell.

Pro-Business Environment: Texas has a long and proud history of being extremely pro-business. With no corporate or individual income tax (yes, you read that right!), it boasts one of the lowest tax burdens in the country. The Texas Enterprise Fund (TEF), established in 2003, has invested ~$500 million to bring major corporations, small businesses and investment capital to the state.

Positive Job Growth: The pro-business stance has led to positive job growth, year in and year out. According to research released December 2016 by Greater Houston Partnership, from 2010 to 2014 Houston alone added nearly half a million jobs, and the city continued to post 12-month net job gains throughout 2015 and 2016. Even the oil crisis did not put a major dent in Houston’s job numbers. The overall state of Texas added more jobs in 2017 than it had in any month since 2013 (and those other months weren’t slow months).

Where businesses go, jobs go—as do the employees required to fill those jobs. Those employees all need a place to live, which ultimately promotes a robust real estate market.

How to be Successful in Multifamily Apartment Investing?

Selecting the right market is THE most crucial decisions an investor can make in managing their portfolio. We believe, the two primary metrics when evaluating a market are:

People move where the jobs are, and companies want to be where strong employment bases are. Simply put: are people moving to this market, and do they have jobs when they get there? If the answer is yes, then there is a good chance you have found a great multifamily market to investigate further.

Keeping this in mind, I went through Forbes’ 2016 list of the fastest growing cities. Texas ranks highly due to its impressive and sustainable long-term growth.

Population Growth: Texas is the second most populous state at 28 million strong (US Census Bureau). It has grown at ~11% since 2010, twice the national average. Within Texas, the region known as the Texas Triangle – loosely defined as Dallas in the north, Houston in the east and Austin-San Antonio in the west – has experienced explosive growth over the past decade. It contains four of the fastest growth cities in the US with a remarkably diverse economy.

The state population is growing overall, but it’s growing in the right ways for apartment investors. There are over 2M Texans, in the prime renting ages between 18-30. Millennials, the largest generation in US history, are in this range and are mostly renters. Between 2005-2015, Houston and San Antonio both saw millennial growth over 16%, while San Antonio and Dallas saw 6%+ millennial growth. As young people continue to flock to Texas’ biggest cities, they will be looking for an apartment to rent as they get settled in their careers and lives.

That’s pretty big, even for Texas.

Job Growth: As mentioned above, Texas is home to 109 of the 1,000 largest public and private companies in the United States. If Texas were its own country (and many people argue that it already is), it would be larger than Canada and South Korea. Currently, it accounts for ~10% of the total US GDP and its share is growing every year.

All of this translates into one thing – jobs. The state unemployment rate is at the national average of 5%, but in our focus areas of the Texas Triangle, it is closer to 3%. Since 2007, the state has added 1.8 million jobs.

Even as the U.S. economy headed into a recession in 2008, the Triangle metros led the nation in job creation with Houston topping the list at 42,000 new jobs. Of the top 100 metros, Houston, Dallas-Fort Worth, San Antonio and Austin were among the 10 largest for job creation in 2008. While the vast majority of America is just now bouncing back from a stagnant economy, the Texas Triangle flourished over the last 8 years.

Naturally, the Texas Triangle’s population and job growth are having a positive effect on housing demand. Home prices in the region have stabilized and begun to increase even while we are seeing home prices nationally continue their decline.

More relevant to us and our investors, multi-family housing inventory can’t keep up with population growth, and the region is seeing extremely low vacancy rates coupled with steadily rising lease rates.

In fact, as we can see from the images below, Texas vacancy rates have been going down while rents have been steadily creeping up, at a faster pace than the national average. Obviously, this is welcome news for apartment investors. 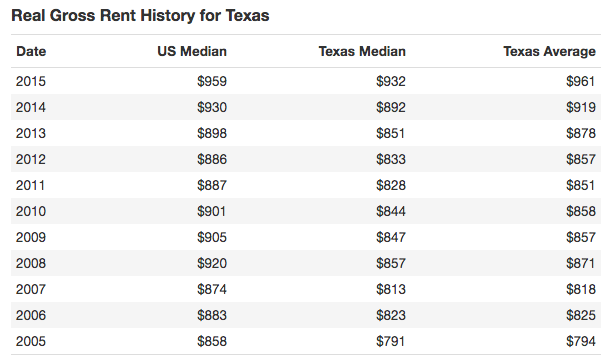 To summarize, this region offers some compelling facts:

And we haven’t even begun to talk about the warm, sunny weather, the absence of the state income tax, high quality of life and affordability. All roads clearly lead to Texas!